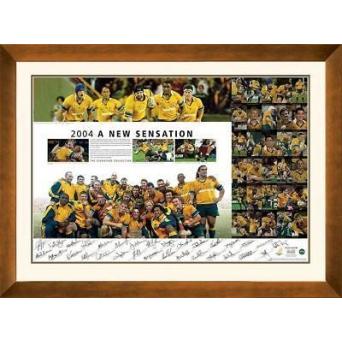 A superbly assembled gold-and-green rugby ‘machine’, the 2004 Wallaby squad features a powerful and scintillating combination of class, experience and youth, primed for success…Captained by Test centurion George Gregan and with Stephen Larkham and Nathan Sharpe sharing the vice-captaincy role, the 2004 Wallabies are a new sensation!

Under the guidance of coach Eddie Jones, Australia opened its 2004 international season with comprehensive victories over Scotland and England, before contesting a gripping Tri Nations series against southern hemisphere rivals New Zealand and eventual winners South Africa. The thrilling, last-gasp victory over the Springboks on the Australian leg of the Tri Series in Perth was even more special, as it marked a ‘regal’ rugby occasion – Wallaby captain and halfback George Gregan’s 100th Test. Gregan’s face was filled with jubilation when Wallaby recruit and former South African Under 21 captain Clyde Rathbone skirted along the sideline, then dived in the corner to score the winning try. What a way for Gregan to bring up his century!

Only 200 editions of the Wallabies lithograph - ‘2004 A NEW SENSATION’will ever be made available. This is also the only officially signed Wallaby lithograph to be released this year.

Officially licensed by the Australian Rugby Union, each edition of ‘2004 A NEW SENSATION’ has been independently authenticated and certified by the major chartered accounting firm PricewaterhouseCoopers.