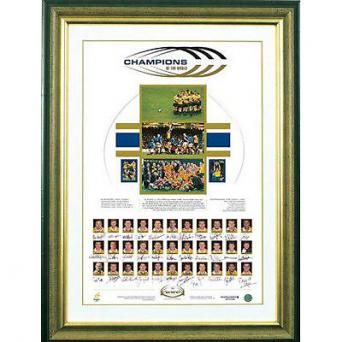 It was one of those rare sporting moments that united the nation… November 6, 1999.

In the dark of night, Australians stood cheering as their Wallaby team climbed the pinnacle of international Rugby supremacy. Defeating the valiant French side in the final at Millennium Stadium, they went through the entire tournament undefeated.

Now, the drama and excitement of that triumphant victory has been captured  in Champions Of The World, a very special limited issue commemorative release from the home of Australia's finest sports collectables.

This landmark collectable release from Australian Rugby marks one of the greatest moments in Australian sports history. In accordance with the importance of this release, every member of the Wallaby World Cup squad has individually hand-signed Champions Of The World - from captain, John Eales, to fullback, Matt Burke, all 33 players have set their personal signatures to the lithograph.

Quality is again of the highest priority… The sweeping panoramic photographs of key moments from the final are simply breathtaking. Also showcased are portrait photographs of every Wallaby involved in the campaign - directly under which they each have signed. The Champions Of The World Commemorative Release   Reproduced on archival paper with light-fast inks, and beautifully framed to conservation standard, this release has been created to endure. Truly a genuine showpiece for your home or office, it measures a substantial 830mm X 620mm, (33in X 25in).

A rare collectable of a rare victory

In keeping with the rarity of the result, the limited issue number has been kept very low… just 500 of the Champions Of The World Commemorative Release will ever be made available.
The integrity of the limited issue is protected by the major independent chartered accounting firm of PricewaterhouseCoopers, who attend the signings and who supply a handsome, numbered 'PricewaterhouseCoopers Certificate Of Authenticity and Limitation'. Additionally, it is fully endorsed by Australian Rugby as Official Licensed Wallaby Memorabilia.