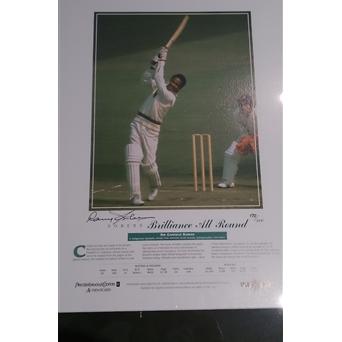 Cricket records are made to be broken. But beyond the record books lie a handful of cricketers whose names will never be erased from the pages of the games history. Sir Garfield Sobers is one such cricketer.

A self-made hero of his generation, he rose from a background of near-poverty in the back streets of Barbados to become the consummate cricketer, the greatest all-rounder the game has known and an inspiration for his countrymen and an unrivalled ambassador for the sport - all of this achieved with a sense of quiet dignity and genuine modesty.

The most versatile cricketer the game has seen, as a batsman he was a left-hander of spectacular power and grace. He could play every shot, along with a few others not in the textbook that he improvised with his trademark brilliant timing and footwork.

As a left arm bowler he posed a unique triple-threat being able to bowl fast-medium swing, orthodox and unorthodox spin - all at a Test match level. His cat-like grace in close-to-the-wicket fielding positions saw him grab 109 catches.

Throughout his career, runs, wickets and records fell to him with monotonous regularity. Just some of his many achievements include the highest Test score of 365 not out, held from 1958 to 1994… scoring more than 500 runs in a series on six occasions… completing the Australian first-class double of 1000 runs and 50 wickets in a Shield season (the only player to achieve it, and he did it twice), along with superhuman feats such as smashing six sixes in an over in a first-class match.

The best ever, bar none

On the 1973 West Indian tour to England noted cricket photographer, Patrick Eagar, captured the power and grace of Garry Sobers majestically cover driving during the 2nd Test at Edgbaston… This magnificent colour study now forms the centrepiece of 'SOBERS Brilliance All Round'. Publishing only the most outstanding photography, PhotoClassics features some of the most breathtaking sports photographs ever taken.

Very little colour photography of Gary Sobers playing exists, making this colour plate quite special. Importantly, each edition has been individually hand-signed by Sir Garfield Sobers, thereby providing a lasting authentic link to one of the all-time greats preserved in his match-winning prime. Only 500 will ever be published. The integrity of the limited issue is protected by the major independent chartered firm of PricewaterhouseCoopers, who attended the signing and who supply a handsome, numbered 'PricewaterhouseCoopers Certificate of Authenticity and Limitation'.