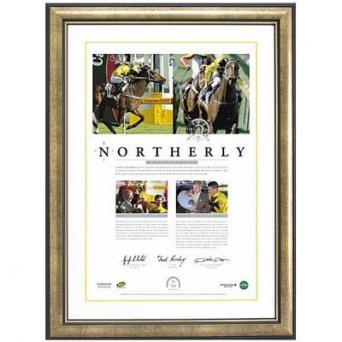 Product shown Framed for illustrative purposes only. Please note that this product is available UNFRAMED ONLY
Superhorse Northerly became the new King of Australian racing and joined the greats of years past in the space of one week at the 2002 Caulfield Cup and Cox Plate. In doing so, he became only the 4th horse ever to win the Caulfield Cup – Cox Plate ‘double’ in the same year, and the 9th ever to win back-to-back Cox Plates. The gallant gelding was retired in October 2004 after a brief comeback from a tendon injury.  On October 19 2002, the champion from Western Australia, Northerly, triumphed in Australia’s most difficult 2400m handicap, the Caulfield Cup. Guided by Greg Childs and prepared magnificently by Fred Kersley, the horse they call “Freak” carried the highest weight of any winner for 22 years. Untroubled by this burden he went on to record a memorable victory…but this was to be just the first chapter in a remarkable Spring Carnival story. Just one week later on October 26, the 2002 Cox Plate was run at Moonee Valley. This race was acknowledged by many as boasting the strongest field of thoroughbreds the race had ever seen. The sheer authority of Northerly’s victory left many convinced that, in the same race that marked the end for the “Queen” of racing, Sunline; a new “King” had been crowned. With Patrick Payne on board, Northerly stalked the champion mare before winning easily by a length. Trainer Fred Kersley managed the change in distance and change of pace expertly, and in Northerly he had a horse who could handle it with the aplomb of a champion, and the authority of ... a King. Now, a lasting collectable commemoration of one of the kings of Australian racing. The traditional design has really captured the tradition of the sport of kings, and one of its champions…  feel the aura of this great horse and its monumental achievement in winning the 2002 Caulfield Cup – Cox Plate double. The featured photographs capture Northerly thundering home at the finishes of the Caulfield Cup and the Cox Plate. The accompanying images show trainer Fred Kersley and jockey Greg Childs at the Caulfield Cup, and Kersley with Cox Plate rider Patrick Payne at the victory presentation a week later. Also included is a written tribute describing Northerly's amazing victories. Each edition is reproduced on heavy, archival paper stock and signed with light-fast inks ensuring maximum longevity. Every one is independently authenticated and certified by the major chartered accounting firm, PricewaterhouseCoopers. Personally signed by trainer Fred Kersley and jockeys Greg Childs and Patrick Payne; this is also the definitive limited edition collectable of these wonderful victories and of a wonderful horse. ‘Northerly – The Double’ was created with the support and endorsement of the Melbourne Racing Club and the Moonee Valley Racing Club, and bears their official marks.