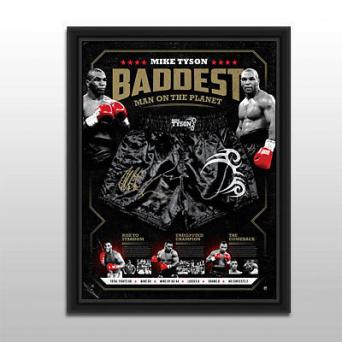 For nearly three decades, Mike Tyson has been a legend both in and out of the ring. Tenacious, talented, and thrilling to watch, Tyson embodies the grit and electricity of boxing, along with the wit and flair of a truly larger-than-life personality.

It’s no surprise that Tyson was once the most feared fighter in all of boxing. One look at the long list of his victories and accomplishments is all that it takes to see that he is one of boxing’s all time greats. While most fight fans know that Tyson was once the undisputed heavyweight champion of the world, few realize that before Tyson, no boxer had ever won the three biggest belts in prize fighting—the WBC, WBA and IBF world heavyweight titles. None, besides Tyson, have ever owned them simultaneously.

Personally signed by Mike Tyson
Featuring images of his record breaking career
Strictly limited to 200 units only
Certificate of Authenticity, inclsuive of images of Mike Tyson signing each product