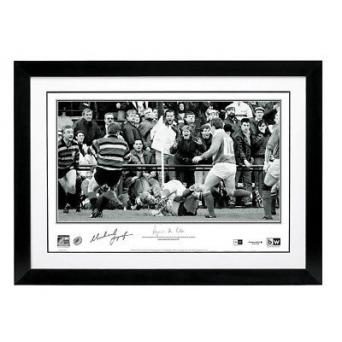 With the Wallabies on the verge of a shock Rugby World Cup exit in a quarter final at the hands of the Irish, all seemed lost. With just minutes remaining, one moment of individual brilliance by Michael Lynagh broke the hearts of the expectant hosts and sent the Australian supporters wild, with an against-all-odds try. That try, created through sheer willpower, put the Wallabies back on the road to Rugby World Cup glory two weeks later at Twickenham.

The try now occupies its own place in Australian rugby folklore. This moment is now captured for ever for you to own in this stunning memorabilia release.
“I recall feeling a huge wave of relief come over me as I crossed the tryline. I noticed that blade of grass and thought what a beautiful sight it was.” – MICHAEL LYNAGH

The featured photograph has dramatically preserved the moment … it captures Michael Lynagh bulldozing his way across the Irish line carrying a defender with him, as the crestfallen crowd looks on. This is the definitive photograph which freezes the moment - and now reproduced for the ages in the exciting new black & whites design. The simple tones are dramatic and compelling and the photograph itself is reproduced as large as possible within the format.

Below the photographs is brief information about the photograph and the edition. Each lithograph is reproduced on heavy paper stock using light-fast inks to maximize longevity. A special varnish has been applied to the photograph for added impact.

Photo for display purpose only - Print is UNFRAMED