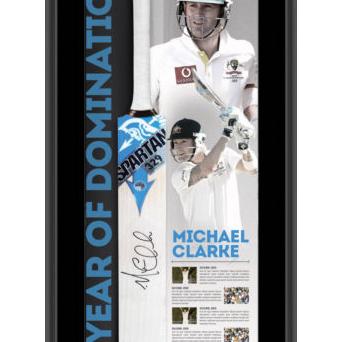 If there was any doubt, another double-century confirmed 2012 as the year of Michael Clarke.

It is a batting streak that is without peer. On a record breaking first day of the 2nd Test v South Africa the Australian Captain scored his second double-century in as many innings and became the first batsman to do so four times in a calendar year.

Previously sharing the record with Don Bradman and Ricky Ponting, Clarke, coming into the final Tests of 2013, had an average of 140.55, the second-highest for a single year (1000-plus runs in a year) behind Garry Sobers' average of 144.66.

The classy right-hander has now scored 483 runs against South Africa this series, facing 641 balls without being dismissed. It was one of the best years ever by an Australian batsman. Few will beat it.

To celebrate his extraordinary year, simply titled ‘Domination’ this bat pays tribute to Clarke's record breaking year. Each bat is personally signed by Clarke and includes the full statistical and pictorial history of one of the greatest years for a batsman in the 140 year history of the game.