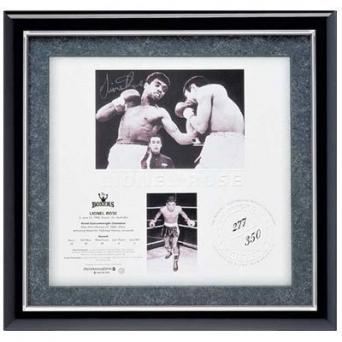 Product shown Framed for illustrative purposes only. Please note that this product is available UNFRAMED ONLY
From struggling athlete… to national hero

Born on June 21, 1948 in Drouin, Victoria in humble circumstances, he rose to true national hero status during a stellar sporting career.  Possessed with charm and character, he caught and held the imagination of the Australian public in the 60's and was awarded the honour of 'Australian Of The Year'.

Such was his appeal that his boxing success launched a very successful singing career, with No. 1 hits, such as 'Thank You For Your Smile'. However, it was in the ring that his greatest honours were hard-earned. A master ring technician, he possessed a stinging, hurtful punch in both hands all wrapped in a silken smoothness that was simply beautiful to watch.

He came quickly through a successful amateur career, turning professional in 1964. In October, 1966 after polished performances, he made the world ratings for the first time.

On February 27, 1968, Rose was given the chance to meet World Bantamweight Champion, Masahito 'Fighting' Harada, in his native Tokyo when another challenger withdrew. Using all of his natural skill and ringcraft, Rose outboxed and clearly outpointed Harada to capture the title in a unanimous decision.

Given the unique place sport holds in the national psyche, The Boxers will be a continuing source of immense pleasure and pride to you. While the names of these redoubtable world champs are enshrined in the annals of Australia's sporting history, this commemoration ensures that their faces and achievements will live on, long after they are gone, a tangible symbol of a wonderful era in boxing - and Australian sport.
Hand signed by Lionel Rose

The main photograph shows Lionel Rose ripping a left to the waist of Fighting Harada in Tokyo on February 27, 1968 when he won the World Bantamweight title, defeating Harada on points. This is the photo that has been signed by Lionel Rose. The photo below is a classic portrait of the Champion in the ring.

This Micro-Edition has just 350 individually numbered  editions, ensuring rarity. When the last Limited Issue Micro-Edition of 'Lionel Rose' is gone, so is your opportunity - all original screens, dies, plates and film used in production have already been destroyed! Independently authenticated by PricewaterhouseCoopers Includes important biographical information, full career statistics and
photographic information. Selected highlights have been beautifully embossed.