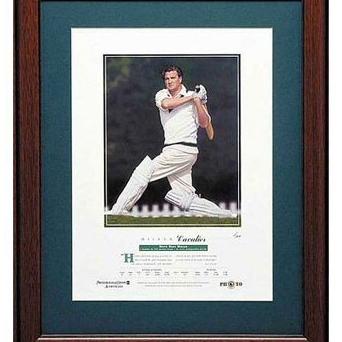 Fighter pilot. War hero. Bon vivant. Cricketer. The dashing raconteur with the common touch, Keith Ross Miller was the ultimate 'Boys Own' hero. Tall, muscular and incredibly gifted, he brought men to cricket grounds for his entertaining play, and women for his matinee idol looks.

A natural athlete, adept at many sports, he also played 50 games for St Kilda.

Like many of his age, the second World War robbed him of his prime, serving between the ages of 19 and 25 flying Mosquito night-fighters in raids over Germany.

With the new ball, his opening attacks in concert with Ray Lindwall made 'Lindwall-Miller' the catchphrase for great bowling partnerships. With a bat in his hand he maintained his fast bowler's temperament. A real dasher, but with solid defense, he batted at number 3 on many occasions.

Like all greats, his abilities endured. In 1955, a year before he retired, he toured the Caribbean taking 20 Test wickets and scoring 3 Test centuries with trademark flourish against a formidable West Indian team that included Sobers, Worrell, Weekes, Walcott and Gibbs.

It has been more than 50 years since he last swung a bat or bowled a ball, and the millions who saw him play have dwindled markedly, so, apart from the bare averages, it is the evidence he has left behind that gives testimony to his feats.

At the end of a stellar career, Keith 'Nugget' Miller could reflect on numerous highlights, the 'Victory Tests', membership of that most exclusive of cricketing clubs The Invincibles, 1954 Wisden Cricketer Of The Year.

The accolades continue even to the present day. In 2000, he was named in the ACB Test Team of the Century as Vice Captain, and No.6 bat.

In the famous Long Room at Lords, inner sanctum of the home of English cricket, just two Australians' portraits hang - one is Bradman, the other is Miller. For the term of his Prime Ministership, Sir Robert Menzies' favourite photograph on display in his office was that of Keith Miller batting.

But perhaps the last testimonial should remain with his teammate, roommate, and bowling partner, Ray Lindwall :

'I've seen them all, the great Garfield Sobers at his best , and I have no doubt Keith Miller is the greatest cricketing allrounder. Keith had the ability to rise to the occasion when the team was up against it. If you were on top, he would finish it off with flair. A wonderful mixer and huge personality.'

The great cricket legend passed away Monday 11 October 2004 at the age of 84.

A classic photograph
On the 1956 Ashes tour a photographer captured the flamboyant essence at the heart of Keith Miller. In the match at Arundel Castle against the Duke of Norfolk's XI, he nonchalantly pulled a short ball to leg. This magnificent colour study forms the centrepiece of this PhotoClassics release, 'MILLER Cavalier'. Publishing only the most outstanding photography, PhotoClassics features some of the most breathtaking sports photographs ever taken.

. Certificate of Authenticity by ASL