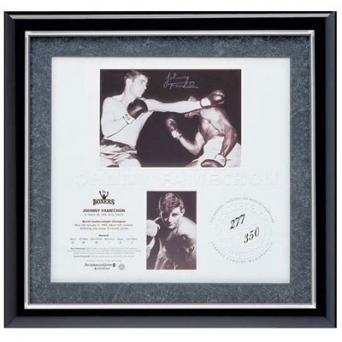 Johnny Famechon fought during a real golden period of Australian boxing. He was champion of the world at the same time as Lionel Rose, when boxing in Australia was enormously popular. Born on March 28, 1945, his early career was distinctive in that he never boxed as an amateur. Under the tutelage of Ambrose Palmer throughout his pro-career, he started it in June 1961 with a three round draw. His first major win came in 1964 when he beat Les Dunn for the Victorian Featherweight title. Next step was the Australian title, which he defended three times. The progression continued with the Commonwealth Featherweight title, defeating Scot Johnny O'Brien in 1967.

Now with a solid 58 fight experience, Palmer teamed 'Fammo' up with famed British promoters, Mike Barrett and Mickey Duff. The match was made against classy Cuban Jose Legra for the World Featherweight title. The fight was held at the Albert Hall in London on January 21, 1969. In a very tough encounter Johnny Famechon outpointed Legra to become the champion of the world.

Next, Fammo defended his crown against former World Flyweight and Bantamweight king, the tough-as-nails Fighting Harada of Japan. In a controversial decision, Famechon was awarded the fight. Any doubt was removed six months later however, when Famechon knocked Harada out in the 14th, in a Tokyo rematch. Fammo called it a day in May 1970 when he surrendered the title to Mexican Vicente Saldivar in a close contest. The fast moving clever boxer never fought again.

The main photograph shows World Champion Josa Legra of Cuba slipping a punch from challenger, Johnny Famechon, at the Albert Hall, London, 21/1/1969.  Unfortunately for Legra, he didn't dodge enough of these as Famechon claimed his crown.

The photo below is a portrait of Johnny Famechon shaping up for the camera prior to his title shot.

This Micro-Edition has just 350 individually numbered editions, ensuring rarity. When the last Limited Issue Micro-Edition of 'Johnny Famechon' is gone, so is your opportunity - all original screens, dies, plates and film used in production have already been destroyed!

Selected highlights have been beautifully embossed.

Personally signed by the Johnny Famechon