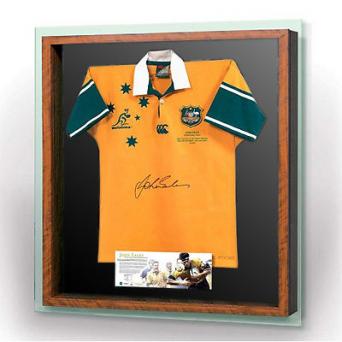 One of rugby union's greatest-ever players and Australia's most capped captain, John Eales shines, almost in a blinding light, as an ambassador for the game and for all that is good in sportsmanship, leadership, character and the ability to define, strive for and achieve goals at both an individual and team level. Of Italian-Irish descent, this gracious family man, natural athlete and genial giant helped oversee a new order, in which Australian rugby fully embraced professionalism and the generous resources that go with it, but never at the expense of the ideals and ethos so synonymous with the code. Eales was a quiet achiever, yet a fiercely spirited and courageous competitor, staunch under pressure and the perfect role model ... knowing how to win and how to lose and how to conduct himself away from the rugby field. A lineout genius, superb ball runner, copybook tackler and exceptional goal kicker, Eales changed the role of the rugby forward forever, transforming what may once have been a largely un-sung position into a match-winning vocation. In his ten year international career he helped turn the image of a forward from a draught-horse into a diplomat. In 1999 he celebrated his crowning glory - captaining Australia to victory in the Rugby World Cup Final in Wales. Good players come and go ... Eales will always remain a true champion.
HIGHEST QUALITY AND PRESENTATION

John Eales' outstanding contribution to rugby comes to life with this exclusive release of the 'John Eales Career Wallaby Jersey' - an essential part of any sporting collection. Personally signed by John Eales and strictly limited to 100 editions, the 'Career Wallaby Jersey' is a stunning release and the first of its kind. Subtly embroidered with important details of Eales' international career, it also includes a  tribute card featuring further statistics from his 11 years with the Wallabies.

Boldly signed across the front and a photographic tribute card detailing John's memorable career in words and action imagery complete this remarkable piece of sporting memorabilia.