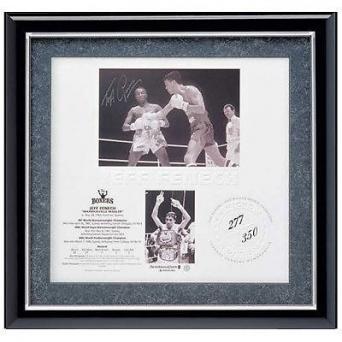 'Our greatest achiever in the ring'

Few sportsmen, let alone boxers, have captured the imagination of the Australian public like Jeff Fenech.  Arguably one of our greatest fighters, it is without argument that he is our greatest achiever in the ring.

He first caught the public's attention at the 1984 Los Angeles Olympic games, where he was unlucky to miss a gold medal.  Fenech turned pro immediately and the 'Marrickville Mauler' was a world champion within an astonishingly quick space of six months and seven fights.  That was the IBF World Bantamweight Championship in April 1985 which Fenech took from Satoshi Shingaki of Japan.  In a pro career of 32 bouts, more than half were with one title or another at stake.  He made three defences of the bantamweight crown before moving up a division to claim the WBC Super-Bantamweight belt.  Three times he defended this title before stepping up for a 3rd time - on this occasion to the WBC World Featherweight title, and made three successful defences.  A fourth title narrowly eluded Fenech in a poor Las Vegas decision' when he drew with Azumah Nelson for the WBC Super-Featherweight title.  Fenech was not the same boxer after this and advancing years precluded further glory. He remains one of a very select group of boxers to have won three world titles and throughout the 80's the passion and sincerity of Fenech ensured unqualified support and admiration from many Australians - boxing fans and non-fans alike.
Hand-signed by Jeff Fenech

The main photograph shows Jeff Fenech in the heat of battle during on eof the toughest fights of his career against Steve McCrory of the U.S.A., 18/7/1986.  In a contest billed as Olympic Revenge, Fenech prevailed and stopped McCrory in the 14th round.
The photo below is Fenech after his successful defence against Satoshi Shingaki at Homebush, Sydney, 23/8/1985.

This Micro-Edition has just 350 individually numbered editions, ensuring rarity. When the last Limited Issue Micro-Edition of 'Barry Michael' is gone, so is your opportunity - all original screens, dies, plates and film used in production have already been destroyed!
Independently authenticated by PricewaterhouseCoopers
Includes important biographical information, full career statistics and photographic information.
Selected highlights have been beautifully embossed.