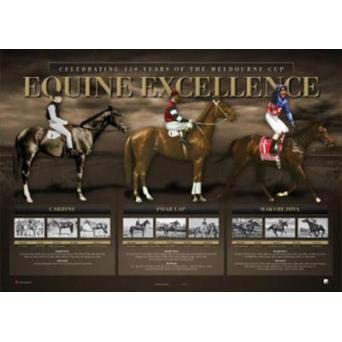 Carbine, nicknamed “Old Jack,” started 43 times for 33 wins, six seconds and three thirds, failing to place only once due to a badly split hoof. He set a weight-carrying record of 10 st 5 lb (66 kg) in the Cup, beating a field of 39 starters.

Phar Lap, ‘The Red Terror’, was the ultimate people’s horse. He was a winner 37 times from 51 starts. The year 1930 was Phar Lap’s year, racing 21 times for 19 victories and two placings. The highlight of Phar Lap’s amazing seven day stretch in the spring carnival, was his dominant three length victory in the Melbourne Cup, as the shortest priced favourite in race history at odds of 8/11.

In 2005 Makybe Diva defied all the odds to record her third consecutive Melbourne Cup. Immediately after the race, trainer Lee Freedman said of the achievement: “Go find the smallest child on this course, and there will be the only example of a person who will live long enough to see that again.”