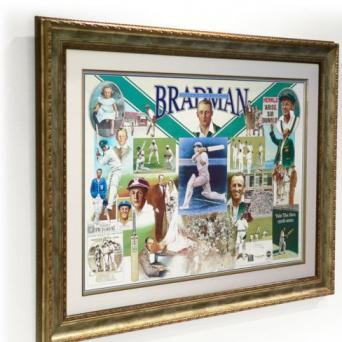 The ultimate Bradman collectable embracing the man, the career, the life.

Created by acclaimed sports artist Brian Clinton in collaboration with Legends, 'Bradman First Last & Always' brings alive the heroic life story of the greatest sportsman the world has ever known.

The giant canvas spans 26 separate vignettes recreated in exquisite and compelling detail … read the fine lettering on the famous Sykes bat and on the Ashes urn ... the delicate stitching in the baggy green … and the adoring multitude of the Headingley crowd … every scene and moment seems to leap from the pages of history into life.

A collectable first
For the first time important life moments are depicted, both on and off the field …
including scenes such as Sir Donald at the piano - illustrating his lifelong love of music.

Commencing with the earliest known image of Don Bradman as a baby and concluding with a newsstand poster announcing his passing, this rich, grand-scale celebration of his life is destined to be the most famous and sought-after of the Bradman collectables.

Personally signed by Sir Donald Bradman
In preparation for the release of this definitive and final 'personally signed edition, the central image featuring the classic cover drive was personally signed by Sir Donald Bradman in 1999 while the work was still in progress. The scope of the piece - spanning his entire life - combined with this original hand signature on each edition guarantees 'Bradman. First Last & Always' a singular place as the most unique Bradman collectable ever to be offered for acquisition.

Authenticated and Certified
Such a landmark release will need the ultimate assurance of authenticity … each edition has been independently authenticated and certified by leading chartered accounting firm PricewaterhouseCoopers, who attended the signing session and provide a Certificate of Authenticity & Limitation with each edition. All work is done in accordance with Australian auditing standards.

'Bradman. First Last & Always' is also wholly endorsed by the Bradman Museum at Bowral as an official licensed collectable.

Explanation of all of the 26 different scenes:
a. 'First': Don Bradman in his first Test match innings against England at the Brisbane Exhibition Grounds
b. 'Last': In his final Test innings, the English team gather round as captain Norman Yardley lead three cheers for the Don
c. 'Always': The quintessential Bradman in the classic cover drive pose
d. Don Bradman as a baby - taken from the earliest surviving photograph of him
e. At the age of 12, with his very first cricket bat - from the first photo of him taken with a cricket bat. The photograph was taken after scoring his first century, 115no for Bowral School against Mittagong School
f. Portrait of the boy Bradman, aged 8
g. Mentor and patron to Bradman from boyhood was Alf Stephens seen here outside the Bradman family home in Glebe Street, Bowral
h. At age 19 wearing the cap of St. George, his first Sydney grade club
i. Stepping out to drive, 1930
j. Waiting to go in to bat for New South Wales, 1931
k. Two of the millions of items to be printed about Don Bradman, a collectable cigarette card featuring Don in his NSW livery; and a newspaper front page featuring his then world record first class score of 452no against Qld
l. The famous Sykes bat, the instrument which used to create records, and a legend
m. His wedding day. Jessie Menzies makes a stunning bride at St. Paul's Church in Burwood, Sydney, April 30 1932
n. Relaxing at the piano. Bradman was a gifted pianist, and was taught by his sister, Lilian
o. Headingley Leeds 1930, and another world record. A 21-year old Don leaves the field after amassing 334 for Australia against England, including 309 in a single day
p. The young Don proudly wears his first tour blazer, 1930
q. In the Test match prior at Lords he scored 254 and has described it as the most technically perfect innings he ever made, in that every ball went precisely where he planned, and all along the ground. Here he acknowledges the crowd after reaching his double century
r. A century of centuries. November 1947 at the SCG, Bradman makes his 100th first class 100
s. The symbol of supremacy between Australia and England, the Ashes urn; never surrendered by Bradman when playing as captain
t. A casual portrait of the Australian captain, 1938
u. With family welcoming him home at the end of his last tour, 1948
v. Captain of 'the invincibles', 1948
w. A coin toss during the home series against the old enemy, England, 1936-'37
x. Melbourne Herald poster announcing the Knighthood for services to cricket, March 15, 1949
y. December 1948, the Don walks out to bat in front of 90,000 spectators at his testimonial match at the MCG
z. A news stand poster, 2001