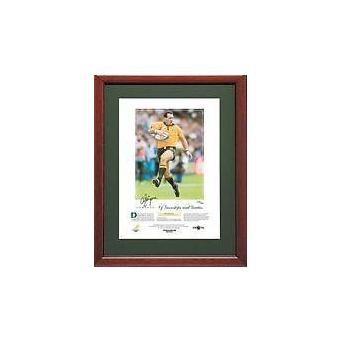 His Test career spanned almost 15 years from 1982 until 1996. He began it with a try against the All Blacks, and 101 test caps later, finished with a world record 64 international tries.

He was an integral part of the 1984 Wallaby Grand Slam-winning side, played in three Australian World Cup campaigns securing Player of the Tournament when Australia won the 1991 Rugby World Cup.

Fast and elusive with a famous mesmerizing goosestep; when he had the ball in his hands crowds in stadiums all over the world came alive hoping to witness the David Campese brand of genius.

In a striking photograph taken during a World Cup match, a brilliant example of that genius was captured as he pauses, then changes up a gear into his electrifying trademark goosestep.

This is the definitive study of this superb athlete at the peak of his powers, and it forms the centrepiece of a new PhotoClassics release, 'Campese. Of Goosesteps & Genius'.

Importantly, each edition has been individually hand-signed by David Campese, thereby providing a lasting authentic link to one of the great modern Australian athletes captured in a definitive study. Only 500 will ever be published. The integrity of the limited issue is protected by the major independent chartered accounting firm of PricewaterhouseCoopers, who attended the signing and who supply a handsome, numbered 'PricewaterhouseCoopers Certificate Of Authenticity and Limitation'.

Item is UNFRAMED - Picture is for display purpose only