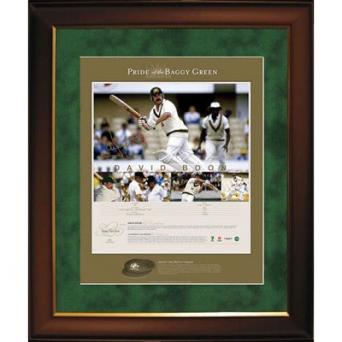 ‘Pride of the Baggy Green’ series – a magnificent, personally signed commemorative saluting the elite sportsmen who have earned the right to wear the coveted baggy green cap, after being selected to play Test cricket for Australia.

For any Australian cricketer, to be awarded the ‘baggy green’ cap – on Test debut - is the ultimate mark of success … a privilege that has been handed to only a select group of players, since the inaugural Test match against England in 1877. Since then, every one of those players has been given a Test cap number, to commemorate the achievement of becoming a Test player for the first time.

Each edition has a traditional but contemporary appearance and comes with the story of Boon’s path to international level, along with images, statistics and ‘high points’ of his debut Test match. It also features his Test player’s number and further images from his first Test series.

Accompanying the action images is additional text, which outlines the tradition and pride that comes with receiving the baggy green cap.