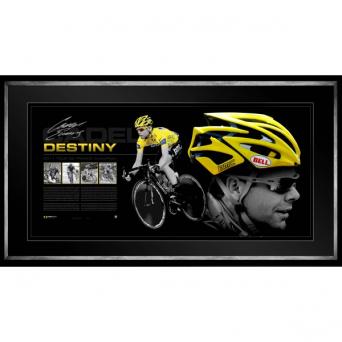 FREE DELIVERY WITHIN AUSTRALIA ONLY

Cycling - Cadel Evans Signed & Framed Limited Edition 'Destiny' Bell Helmet
A brilliant time trial by Cadel Evans has seen him achieve what no other Australian has been able to, namely claim the most prestigious and grueling test of cyclists in the world – the Tour de France.

The 2009 world champion road cyclist beat a crack field of 200 to take the coveted yellow jersey for the ride down the Champs-Elysees.
Evans timed his run perfectly, blitzing race leader Luxembourg's Andy Schleck in the penultimate stage – the 42.5 kilometre time trial – to secure the coveted yellow jersey.
He entered the 20th stage trailing Schleck by 57 seconds.
Remarkably, by the 27.5 kilometre mark of the time trial, Evans had more than double the time he needed to claim the title. Put simply, it was the ride of his life.

He set such a breakneck speed that his BMC team bosses ordered him to slow down in the final few kilometres.
Earlier he put everything on the line and appeared to come close to crashing on a couple of occasions on downhill sections, leaving the Schleck brothers – Andy and Frank – in his wake.

When he eventually reached the finish in the picturesque heart of the French Alps, he was 1 minute 34 seconds ahead of Andy and 2 minutes 30 seconds in front of third placed Frank. 34-year-old Evans’ 2011 triumph sees him become only the third non-European to claim the Tour de France, alongside Lance Armstrong and Greg LeMond – stellar company for an elite rider that held his nerve for 3,430.5 kilometres.