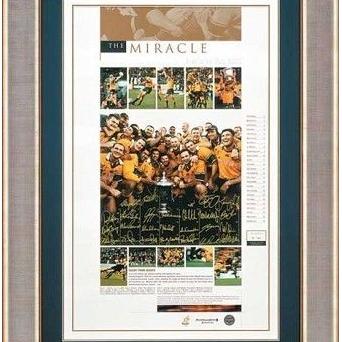 Saturday August 5, 2000 saw what many believe to be the greatest Test of all time, a cliff hanger until the very last minute, and a kick that left the crowd breathless and won Australia its 3rd consecutive Bledisloe Cup. All of this after the jaw-dropping theatre of the first Test at stadium Australia three weeks before won again at the last minute, but by the All Blacks.

The Miracle is a lasting memento of the magnificent 2000 Bledisloe Cup series, from the All Blacks' 3-tries-in-5-minutes opening onslaught, through to John Eales' electrifying last-ditch kick.

Ten classic action photographs bring the Game to life vividly, capturing the intense pressure of the unofficial battle for World Rugby supremacy between the two archrivals the mighty All Blacks and the awesome Wallabies.

The lower set of 5 colour plates was captured at the Stadium Australia thriller. Mortlock wrestles an opposing player to the ground, Larkham slips a deft inside pass, Jeremy Paul snatches the try to put Australia in the lead, Jonah Lomu responding with a trademark touchline stampede to claim back the lead in the last minute, as the desperate hand of Latham clutches thin air. And finally, the All Blacks, fists in the air celebrating!

The top group of 5 is from the Wellington arm-wrestle. Mark Connors tears the ball from the sky, John Eales coolly pots the goal that won the Cup, followed by sheer jubilation and the raising of the Bledisloe for the third consecutive year.

Accompanying text lists all the statistical details, describes the events depicted and lists every wallaby player from both games.