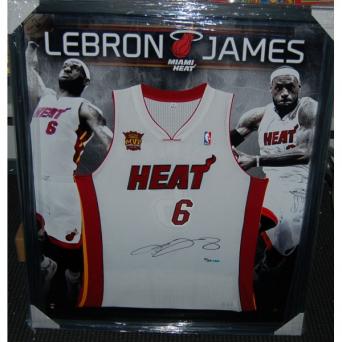 Basketball - NBA - Lebron James Signed and Framed Miami Heat Jersey
Lebron James often referred to as "King James" was drafted by the Cleveland Cavaliers with the number 1 pick in the first round of the 2003 NBA Draft. Wearing #23 jersey for the Cavs just like his idol Michael Jordan wore for the Chicago Bulls, James made a sudden impact on the NBA in his debut season and was awarded the NBA Rookie of the Year award. The whole NBA world was amazed with James' debut season as whispers of him becoming as good as his idol Michael Jordan, and the facts backed up those whispers as Lebron joined Oscar Robertson and Michael Jordan as the only players in NBA history to average at least 20 points, 5 rebounds, and 5 assists per game in their rookie year.

James had a 7 year stint at the Cavs with a lot of success leading them to 5 play-off appearances and a finals campaign in the 2006-07 season. But Lebron wanted the ultimate success, a NBA Championship. At the end of the 2009-10 season, James became an unrestricted free agent and moved to the Miami Heat. NBA stars Dwayne Wade and Chris Bosh had also signed with the Heat, becoming Miami's "Big 3".

Since the move to Miami, James has won back-to-back NBA Championships in the 2011-12 and 2012-2013 seasons. Along with two NBA Finals MVP awards. "King James" is arguably the best player in the NBA at this present time and well with-in the Top 10 NBA players to ever play the game.

Lebron "King" James has four NBA Most Valuable Player awards, two NBA Championships and two NBA Finals MVP awards next to his name in his 9 year career, with many more years to play, there's no doubt these numbers will increase.