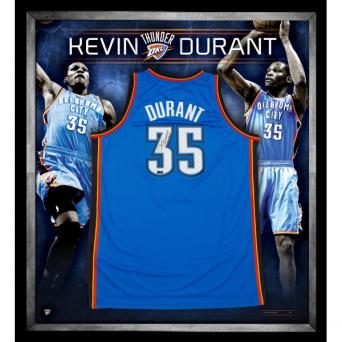 Durant's success started with his Amateur Athletic Union (AAU) PG Jaguars youth basketball team.
The team won two national championships during Durant's time.
To this day, Durant wears the no.35 jersey in honour of his AAU coach and childhood mentor, Charles Craig who passed away at the age of 35.

Kevin attended the University of Texas Longhorns in Austin. As a freshman, Durant started every game for the Longhorns averaging 25.8 points and 11 rebounds a game throughout the season.
He scored 20+ points 30 times and 30+ points 11 times. Durant was the first freshmen in history to win the Oscar Robertson and Adolph F. Rupp awards.

After 1 year of college basketball, Durant declared himself ready for the 2007 NBA draft. June that year, Durant was selected #2 in the first round by the Seattle Supersonics.
In Durant's rookie season, he was selected as a member of the NBA's All-Rookie Team and was named NBA's "Rookie of the Year".
Supersonics relocated to Oaklahoma City, becoming the Oaklahoma City Thunder. Since then, Durant has been named NBA All-Star three times (2010-12) and All-NBA First Team three times (2010-12). He also led the league scoring three years in a row as NBA scoring champion (2010-12).

Personally signed Oaklahoma City Thunder Jersey By Kevin Durant
Limited Edition of only 50 units worldwide
Comes with a Certificate of Authenticity direct fron Panini (He's exclusive signing agent)
Presented in a Deluxe Presentation Frame
Accompanied by a Certificate of Authenticity
Approximately frame dimensions of 1200 x 1000mmrtwork
Image is an artwork, there may be some slight changes