ANZAC THE SPIRIT OF ANZAC THE SANDS EDITION ANZACS AT WAR 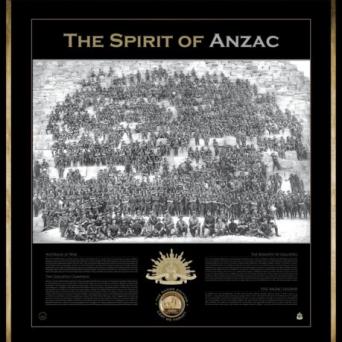 In 1903 the Perth Rifle Volunteers were renamed the 11th Australian Infantry Regiment. At this stage the only permanent soldiers in Australia were Engineers, Coastal Defence Gunners and a handful of Staff Officers. On the outbreak of WWI, Australia had a militia of about 100 000 people. The Defence Act 1903 stipulated that the Australian Militia Forces were only to be employed in the Defence of Australia. Hence the Australian Imperial Forces (AIF) was raised for service overseas. This is commonly referred to as the 1st AIF. The term of enlistment was for “the duration of hostilities plus 6 months”. The 11th Australian Infantry Battalion AIF was raised at Black Boy Hill Camp on 17 August 1914 and recruited from the militia units. The now famous picture of the 11th Bn AIF at the Cheops pyramid in Egypt in 1915 is shown throughout military history displays and books the world over. The picture was taken just before the landing at Anzac Cove. Not many of the soldiers in this picture survived the 8 month campaign.After the Campaign on the Gallipoli Peninsula, the 11th Battalion AIF went on to serve with distinction in France and Belgium from 1916-18. They returned to Australia at the end of the war and disbanded on the 5 February 1919. The Battalion was awarded a Kings Colour for it’s service during the war which was held in the of custody the Militia 2/11th Battalion. The 11th Battalion was among the first infantry units raised for the AIF during the First World War. It was the first battalion recruited in Western Australia, and with the 9th, 10th and 12th Battalions it formed the 3rd Brigade. The battalion was raised within weeks of the declaration of war in August 1914 and embarked for overseas after just two weeks of preliminary training. It arrived in Egypt to continue its training in early December. The 3rd Brigade was the covering force for the ANZAC landing on 25 April 1915 and so was the first ashore at around 4:30 am. Ten days after the landing, a company from the 11th Battalion mounted the AIF’s first raid of the war against Turkish positions at Gaba Tepe. Subsequently, the battalion was heavily involved in defending the front line of the ANZAC beachhead. In August, it made preparatory attacks at the southern end of the ANZAC position before the battle of Lone Pine. The 11th Battalion continued to serve at ANZAC until the evacuation in December. After the withdrawal from Gallipoli, the 11th Battalion returned to Egypt. It was split to help form the 51st Battalion, and then bought up to strength with reinforcements. In March 1916, the battalion sailed for France and the Western Front. From then until 1918, the battalion took part in bloody trench warfare. Its first major action in France was at Pozières in the Somme valley in July. After Pozières, the battalion manned trenches near Ypres in Flanders before returning to the Somme valley for winter. In 1917 the battalion took part in the brief advance that followed the German Army’s retreat to the Hindenburg Line. During a German counterattack at Louverval, France, in April 1917 Lieutenant Charles Pope was killed performing the deed for which he would be awarded a posthumous Victoria Cross. The battalion subsequently returned to Belgium to participate in the offensive that became known as the Third Battle of Ypres. The battalion helped to stop the German spring offensive in March and April 1918, and later that year participated in the great Allied offensive launched east of Amiens on 8 August 1918. This advance by British and empire troops was the greatest success in a single day on the Western Front, one that German General Erich Ludendorff described as “the black day of the German Army in this war” The 11th Battalion continued operations until late September 1918. At 11 am on 11 November 1918, the guns fell silent. This armistice was followed by a peace treaty, signed at Versailles on 28 June 1919. In November 1918 members of the AIF began to return to Australia. In February 1919, the 11th and 12th Battalions were amalgamated due to steadily declining numbers in both battalions. They remained so linked until their last members returned home for demobilisation and discharge.