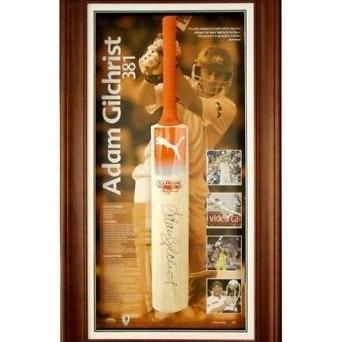 Three years after first pulling on the coloured garb in a One Day International, Adam Gilchrist made his long-awaited Test debut at the ‘Gabba against Pakistan. The world witnessed an accurate snapshot of what was to come, as he clubbed 81 runs from 88 balls and took 5 catches and a stumping. He has – quite literally – not taken a backward step since, and has been symbolic of the whirlwind style of attacking cricket employed by Australia since Steve Waugh took over as captain.

Gilly has redefined the term ‘wicketkeeper-batsman', and could command a place in any country's Team of the Century on his batting skills alone. A breathtakingly brilliant striker of a cricket ball, his clean hitting and clean image are a sponsor's dream. Few would dispute that Adam Gilchrist will be recalled as the most destructive batsman of his era.

The weapon he chooses to wield is the PUMA Classic. Holding the distinctive orange handle high on the grip, Gilly has dispatched the best bowlers in the world to all corners of ovals across the globe.